The large number of theoretical plates of the columns offer high
resolution.
The packing materials have chemical stability and the columns have
long life.
The enantiomeric stationary phases give the inverse elution orders
and so accurate determination of the optical purity and efficient
preparation of the enantiomer are attained.

■The chiral components are coated hydrophobically on ODS
OA-5000 and 6000 series offer chiral discrimination by ligand exchange interaction in the
reversed phase mode. The chiral ligands such as penicillamine (OA-5000) or tartaric acid
derivatives (OA-6000 series) are coated on ODS silica, though the volume of organic solvents
added to the mobile phase is limited. Mobile phases including Cu++ ions are used in these
columns. They are effective for direct enantiomer separation of not only amino acids, hydroxy acids
but also copper-chelate forming compounds such as amino alcohols, diamines, dicarboxylic acids,
aminolactames and dipeptides. Especially OA-5000 can be applied for extremely wide range, while
OA-6100 is effective for β-amino acids,β-hydroxy acids and hydrophilic amino acids.

Notation on the SUMICHIRAL database 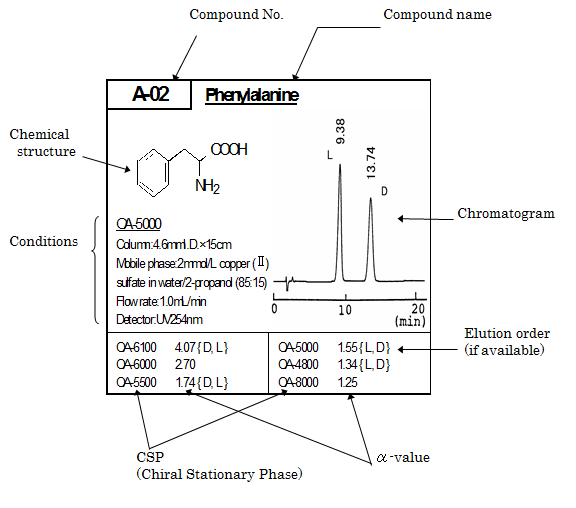